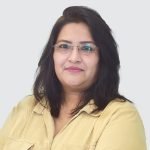 Tasneem, a soft spoken woman mostly trade with the 1-min as well as the 15-min chart. She is actually a price action trader and therefore mainly trade around the support and resistance of scripts.

In case of a rangebound market, She trade using 1-min chart but when market trend is clear market she move to the higher time frame.

She always does his research the previous day and write down his support and resistances one day before. Then She wait for the market to come to these zones before entering in a trade. But She does not buy at the first instance, She waits for a retest to get in the actual trade.

There are days when She get an opportunity to take 5-6 trades, but in case of trending days, She sits throughout the day with only a single trade. She looks for a trade which gives a risk-reward ratio of 1:3 but these trades are rare and have to mostly to sit for a 1:2 trade.

In the case of a clearly trending market, She takes  signals from the Exponential Moving Average (EMA) and the Average Directional Index (ADX). Sometimes She also utilize his knowledge of  FIB ATR (Fibonacci bands with Average True Range) which gives a much clearer signal.

Here She takes trades with a 1:3 risk reward opportunity. She rarely carry trades home unless it is a very strong trend and the closing is strong. She has on an average about 6 winners for every four losses in her intraday trades.

But her biggest gainers come from trading on the expiry days. Sometimes She thinks why to bother trading on other days when most money can be made on expiry day trading.

Here too the strategy more or less remains the same. She is an option buyer and pick up a slightly out-of-the-money (OTM) option which is closer to a support or resistance which is where She feel the market can go. These trades are always taken in the post-lunch session when the market gives a sharp burst.